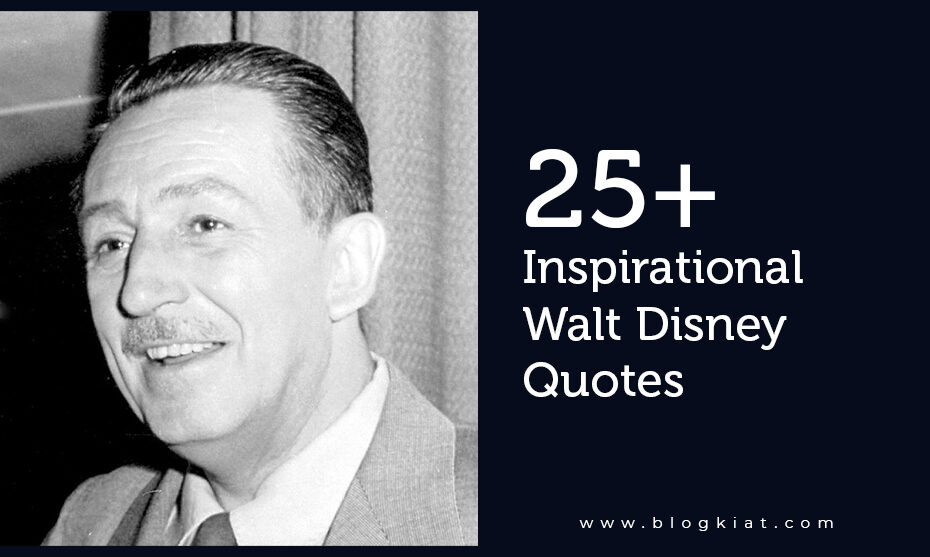 Walt Disney who is also very famous by the name of Walter Elias Disney was born in Chicago, Illinois, the U.S. on December 5, 1901. He is a very well-known creator of cartoon characters, animated cartoon films such as Mickey Mouse and Donald Duck. Disneyland was an amusement park that was planned and built by Walt Disney that opened near Los Angeles in the year 1955. Also before his death, he started building a second such park which was known as Walt Disney World that was located near Orlando, Florida.

What was Walt Disney’s motto?

In the year 1922, Disney and Iwerks started a small studio, and then they purchased a second-hand movie camera with the help of which they created 1-2 minute animated advertising films for the distribution to the local movie theatres. They also did Laugh-O-grams which was a series of animated cartoon sketches.

After the experience of several years, in 1927, before the transition to sound in motion pictures, Disney and Iwerks tried out a new character Mickey who was a very energetic, cheerful, and mischievous mouse. Plane crazy and Gallopin’ gaucho were the two shorts which were organized by them and that were to establish Mickey mouse when the jazz singer brought the originality of sound to the music.

Walt Disney has so many long thoughts of creating feature-length animated films along with the shorts. So in the year 1934, started working on snow white and the seven dwarfs which were a version of a classic fairy tale and a project that needed great coordination of studio talent for which Disney possesses a unique capacity. During the early phase of 1950, Disney had commenced several plants for building a huge amusement park near Los Angeles. Disneyland opened in the year 1955 and created a remarkable presence of nostalgic sentiment and fantasy in its design and construction. 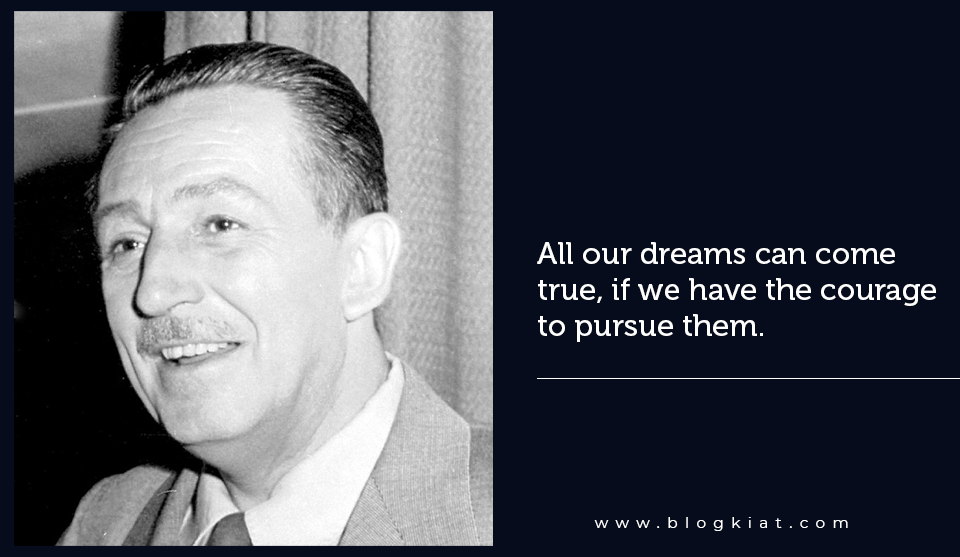 Why worry? If you’ve done the very best you can, worrying won’t make it any better. 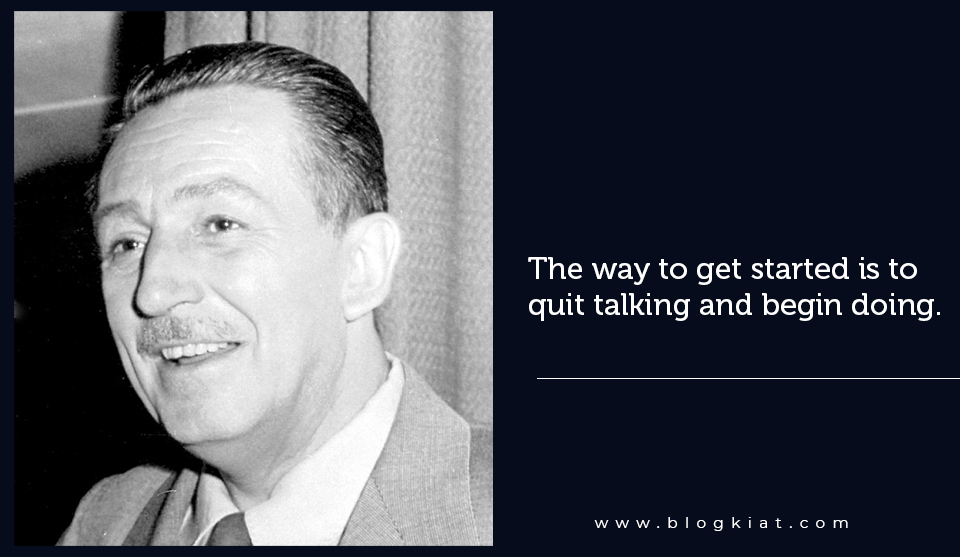 It’s kind of fun to do the impossible.

You reach a point where you don’t work for money.

Why worry? If you’ve done the very best you can, worrying won’t make it any better.

Also Read : Quotes About Never Give Up 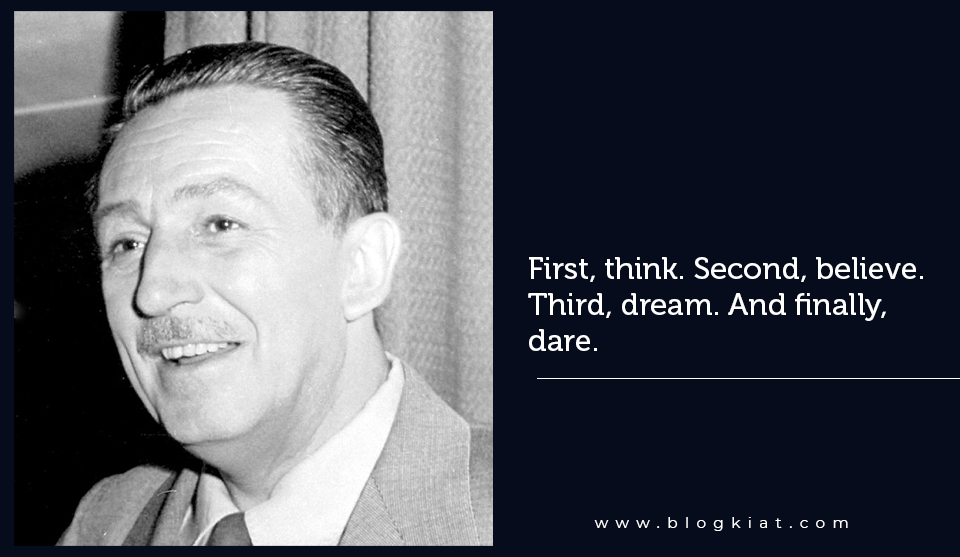 Get a good idea and stay with it. Dog it, and work at it until it’s done right.

The difference between winning and losing is most often not quitting.

All you’ve got to do is own up to your ignorance honestly, and you’ll find people who are eager to fill your head with information. 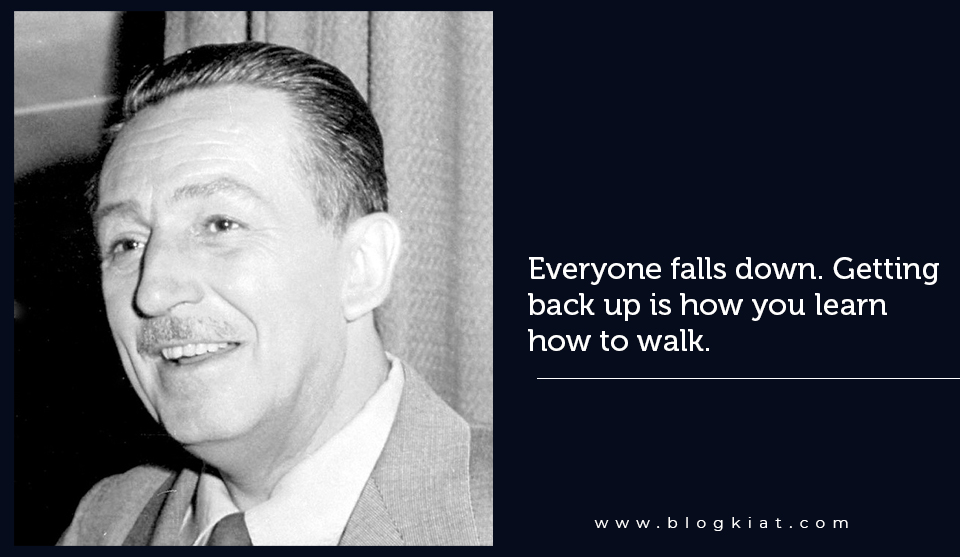 Never get bored or cynical. Yesterday is a thing of the past.

All cartoon characters and fables must be exaggeration, caricatures. It is the very nature of fantasy and fable.

We allow no geniuses around our Studio. 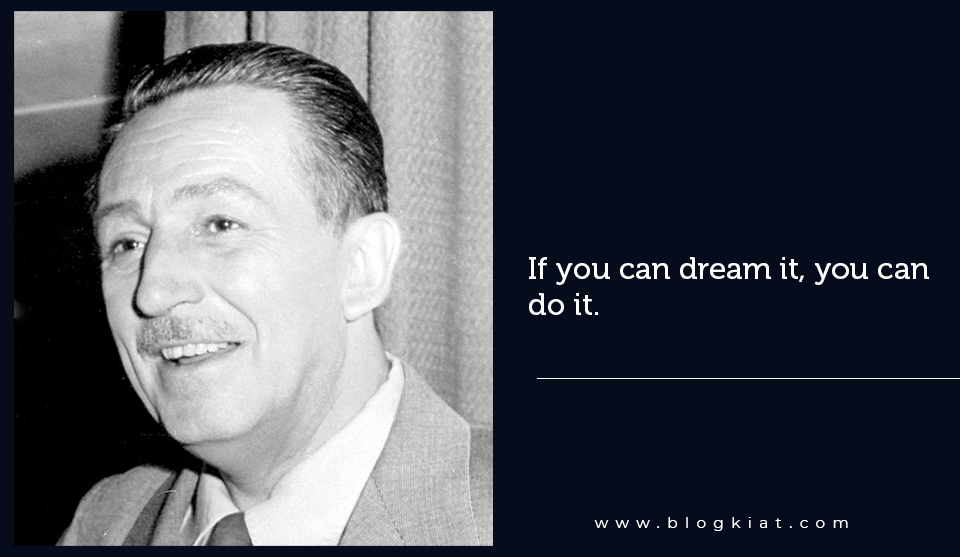 I never called my work an ‘art’ It’s part of show business, the business of building entertainment.

I am not influenced by the techniques or fashions of any other motion picture company. 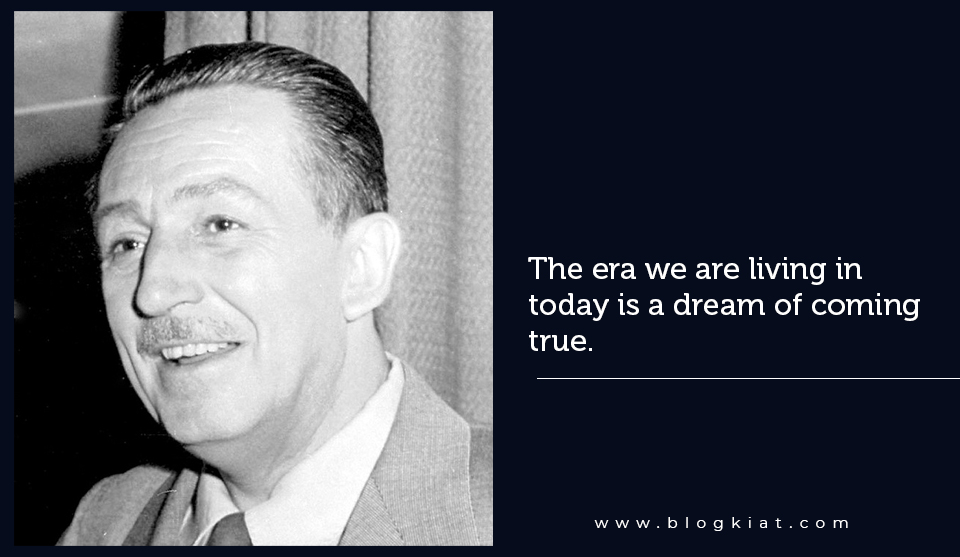 I have been up against tough competition all my life. I wouldn’t know how to get along without it.

You reach a point where you don’t work for money. 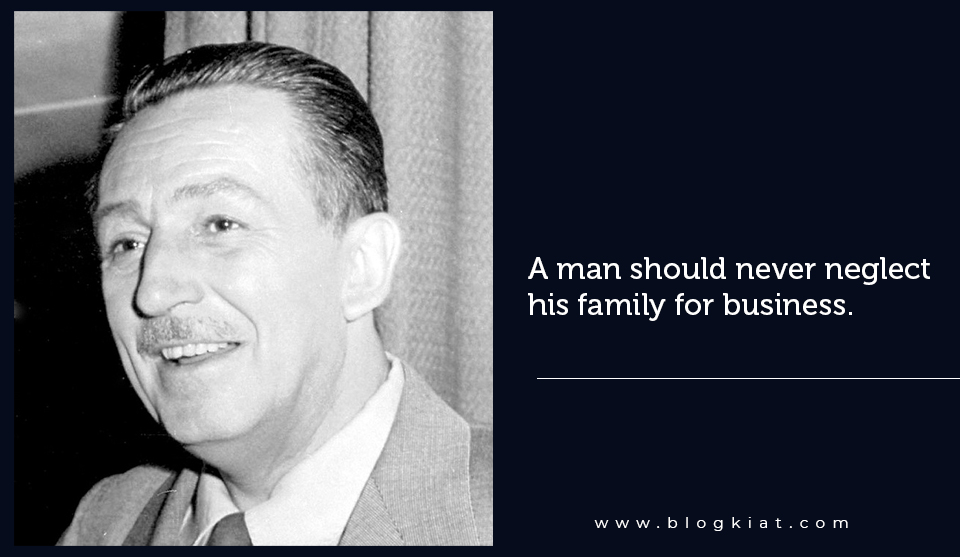 I’d say it’s been my biggest problem all my life… it’s money. It takes a lot of money to make these dreams come true.

Don’t let your fears take the place of your dreams.

Whatever you do, do it well. 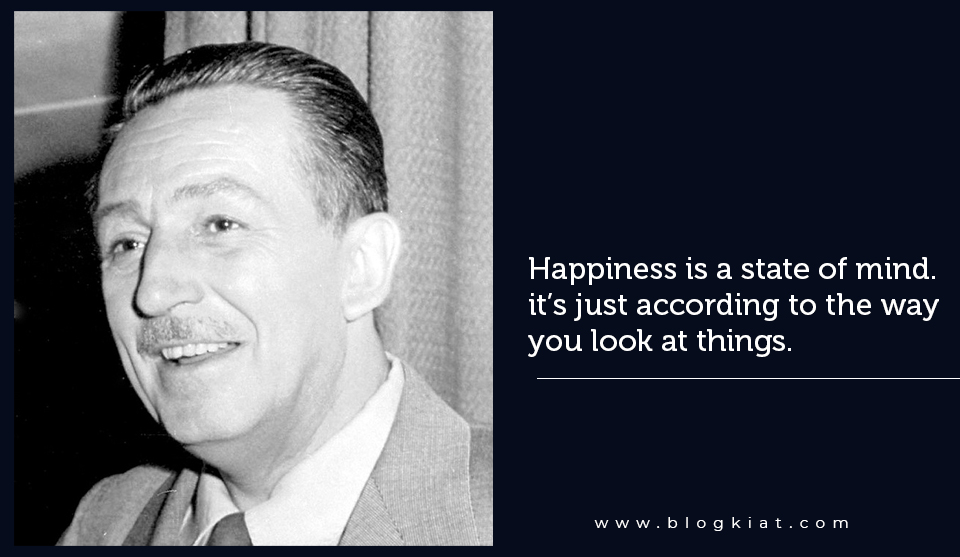 When you’re curious, you find lots of interesting things to do.

I dream, I test my dreams against my beliefs, I dare to take risks, and I execute my vision to make those dreams come true.

Money doesn’t excite me, my ideas excite me. 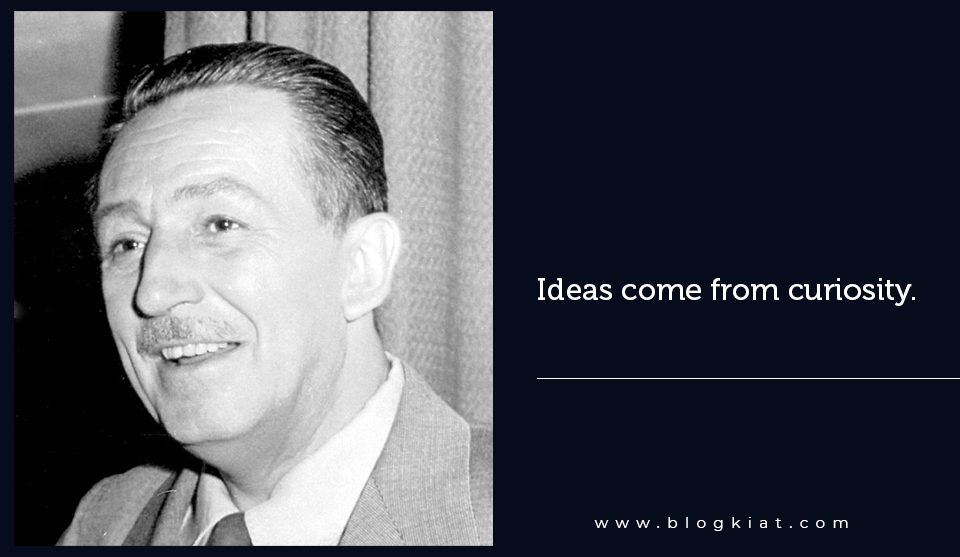 My greatest reward is that I have been able to build this wonderful organization.

We allow no geniuses around our Studio.

I don’t want the public to see the world they live in while they’re in the Park (Disneyland). I want to feel they’re in another world.

Sorry. No data so far.